How any country can learn to dance and stop the coronavirus. How the Us and the Eu failed to control the virus. Why the West’s testing and contact tracing is largely useless. Dal blog dell’autore.

You’d imagine eight months into the pandemic most countries would know exactly what to do to stop the coronavirus. And yet here we are. 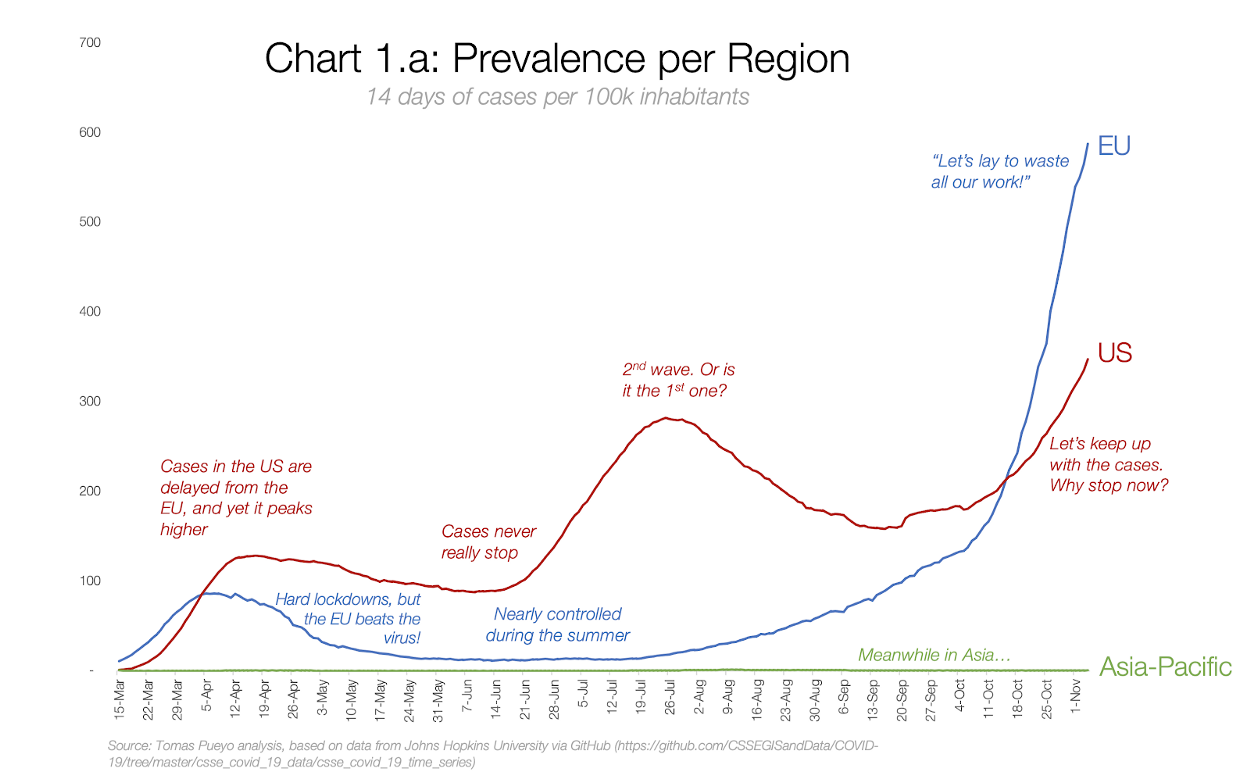 You’ve probably seen charts like this one by now. The detail few add is the green line at the bottom, with Asia-Pacific countries. Let’s zoom in.

This is a myth-busting graph. Japan, Taiwan, China, Hong Kong, Singapore, South Korea, New Zealand, Australia, Mongolia, Thailand or Vietnam all followed different variants of the Hammer (heavy lockdowns when there’s an uncontrolled outbreak and they don’t know what to do) and the Dance (a series of intelligent measures to keep infections low), yet all have been successful.

This list includes all types of countries: democratic, authoritarian, continental, islandic, freedom-loving, Anglo-Saxon, developing, developed… They prove any country can succeed. And they’re not the only ones: From the Caribbean to Uruguay, Canada’s Atlantic Provinces or several African countries, many countries controlled the epidemic.

Meanwhile, most Western countries didn’t pay attention, suffered massive outbreaks, applied heavy Hammers to stop them, but never learned how to dance. When the summer recess ended, they were not prepared for the back to school season and its new wave of cases. As the winter progresses, it will only get worse.

This is what has happened in Europe over the last nine months. Source: Tomas Pueyo commentary and annotations on map from innouveau

Today, the Western world has another chance. Joe Biden is the new president of the United States, and will want to show a different approach to the virus. In Europe, multiple countries have woken up from their midsummer night’s dream and started and restricting movement again, including Ireland, UK, France, Belgium, Spain, Italy, Germany, and even Sweden.

For the countries that want to control the virus: How should they dance?

To keep the coronavirus at bay in your community, you have four layers of defence:

None of these defences is perfect. But, together, they can stop enough cases to reduce the transmission rate R to below 1 and keep the virus out.

Let’s look at each one of them.

1. The Fence: Keep Infections out

It’s common sense that if at the border you don’t stop people coming from infested areas, some will bring the virus in and cause outbreaks.

I call Fences the measures to stop the virus at the border. There are three types:

Countries can apply each Fence with different travelers: the higher the infection likelihood, the stronger the Fence.

Walls are very expensive, so they should be used sparingly. Checkpoints can be quite cheap, but won’t catch all cases. Quarantines are probably the sweet spot: a test, a filled form telling the authorities where the traveler will be, enforcement to make sure the quarantine is respected, and a big fine for those who don’t. With rapid tests on the day of arrival and after four days of quarantine, you will likely stop most of the infections.

As cases go down, countries — or states — with very few infections can open up to each other, creating “green bubbles” with no fences.

Some people look at studies about border closures and say: “They don’t work! They only delay the inevitable!” That’s because these studies always look at these measures in absence of other measures. Of course they’re not sufficient! Fences alone can not stop the epidemic. They are only one layer of defence. Somebody will eventually pass through and seed an outbreak.

No Fence, no defence.

What these people miss is that they might not be sufficient, but they’re necessary: They don’t work standalone, but without using them, it’s impossible to stop the virus. Tell me a single country that has been able to keep the number of cases low without a strong Fence. They don’t exist. Eventually, they get overrun. That’s why Japan, Taiwan, China, Hong Kong, South Korea, New Zealand and Australia all have strong Fences.

Conversely, that’s one of the big failures of the European Union during the summer. After a very hard spring, with heavy lockdowns across the continent, European countries let their guards down and opened their borders to each other, trading seeds. Now we know that a majority of EU’s current cases came from Spain. Something similar happened between US states.

No Fence, no defence.

2. Social Bubbles: Abstinence from Meeting Others

Some infected people will make it into your community. You can’t avoid it.

When they do, you want to prevent them from meeting other people. The more people remain in their social bubbles, the more the infections will be prevented from traveling and infecting people from other bubbles.

Measures that promote bubbles go from the least aggressive, such as limits to the size of crowds, all the way to total lockdowns: closures of the economy that require every family to remain in their bubble.

Other measures include curfews, limits to the number of people that businesses allow at the same time, staggered operation hours, bans of certain types of gatherings, business closures…

Total lockdowns are destructive. They ask people to stay home and close all the economy but for essential businesses. That’s what I called the Hammer back in March, when I exhorted governments to apply it to stop the virus.

That made sense back then, when the true extent of the epidemic was orders of magnitude higher than we knew because we didn’t test enough, when our healthcare systems were collapsing, when we had no idea how to dance to tackle the virus. The Hammer would stop the growth of the epidemic and give governments a few weeks to get their act together.

That’s not the case today. If a country is hit by a first wave, applies a Hammer, then has seven months to prepare to Dance, yet has a second wave, and then wants to apply a second Hammer… What makes citizens believe the government will learn better this time around? Why would they believe there won’t be a third wave, a third Hammer, and then a fourth? Why wouldn’t they believe the government is irresponsibly playing yoyo between lockdowns and outbreaks?

Lockdowns can be justified, but only for a few weeks, to get the new wave under control, and only when a country has a good plan to learn how to dance: the faster the decline, the shorter and less harmful the lockdown, and the quicker people can resume a coronavirus-free life. In fact, this is exactly how the WHO says we should use them. Otherwise, they should be avoided as much as possible.

Luckily, we’ve learned enough to know the types of social gatherings that must be avoided and those that are ok.

For example, shopping with masks, social distancing and hygiene seem to be mostly safe. So shops in general should not close. In fact, we’ve learned something key about the virus to determine what gatherings to avoid.

It turns out most events and most infections don’t matter. Many differentstudies have proven that 10% to 20% of cases account for 80% to 90% of transmissions. By eliminating superspreader events, you can dramatically reduce the epidemic. 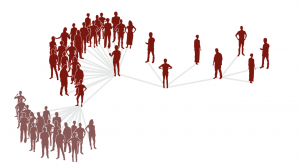